Food waste is widespread, especially at Christmas. As you wander around your local supermarket, you can’t help but wonder what will happen to that mountain of mince pies once the celebrations are over. According to Waste Awareness Wales, 230,000 tonnes of food, worth £275m, are thrown away across the UK during the Christmas period.

The issue of food waste is particularly poignant when you consider those who are going hungry. According to Guy Boswell, Cymru project officer at the charity FareShare, Wales suffers significant levels of general and food poverty. He said: “Around 650,000 people in Wales live in households below the low-income threshold. This is 23% of the population.”

He added: “At present there is no organised retail edible food waste diversion scheme operating in South East Wales. Ad hoc arrangements between specific retailers and charities do exist, but such donations tend to be sporadic and seasonal.”

Georgina Taubman, waste reduction officer at Waste Awareness Wales, said: “In Wales, we throw away a staggering 410,000 tonnes of food and drink each year. This means we buy, and then waste, around £600m every year on food and drink, which could have been eaten. That works out at an average of £420 per household per year.”

And individual waste is only part of the picture. According to a report by the Sustainable Development Commission, supermarkets in the UK throw away 1.6m tonnes of food per year. A member of staff at a Cardiff branch of Tesco said: “It’s crazy how much food we have to throw in the skip. We wish we could take some of it home, but we’re not allowed.”

Most chains are unwilling to discuss food waste, but it seems the main concerns centre around liability issues. Stores are worried that if they give food away, they will be held responsible if someone becomes ill, which could land them in legal trouble.

Others worry that giving food away for free devalues their products, while some claim they simply do not have enough staff to reduce the prices to clear shelves at the end of the day. This makes landfill a cheaper and easier option.

Deborah Clark, Co-op PR officer for Wales, said: “We do not encourage freeganism because of the potential health risks. Freeganism can also result in litter being scattered around, which poses a problem for local residents.”

Bins outside a Cardiff supermarket

The environmental impact of food waste is significant. As food rots, it produces greenhouse gases, including methane and carbon dioxide. Mr Boswell said: “Every tonne of food saved from landfill represents 4.5 tonnes less of carbon dioxide emitted into to environment.”

According to the charity Love Food Hate Waste, if we all stopped wasting food that could have been eaten, the CO2 impact would be equivalent to taking one in five cars off the road. 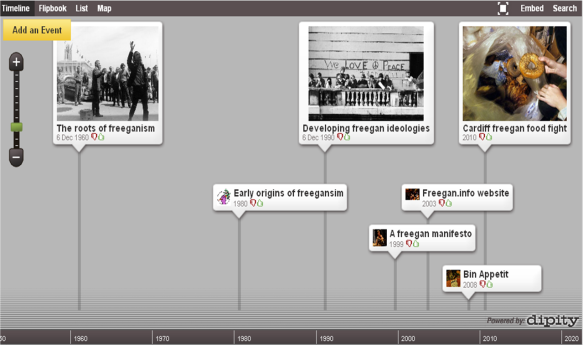 A brief history of freeganism

An interactive timeline of freeganism on dipity

Various movements have evolved in response to food waste. For example, Freeganism is often regarded as part of a wider anti-consumer ideology. The word “freeganism” comes from the words “free” and vegan” and describes the lifestyle of those who reclaim and eat food that has been discarded.

Dave Richards, a research assistant from Cardiff, has been a freegan for three years. He said: “People become freegans for many reasons. Some want to opt out of the consumer-driven economy, some want to reduce their environmental impact, while others just want to save money.”

Many freegans get food by retrieving it from supermarket bins, in a practice known as “skip diving,” “bin raiding” or “skipping.” Kate James, a student in Cardiff, has taken part in bin raiding throughout her time at university. She said: “Bin raiding has become increasingly popular in Cardiff over the last few years.”

Freegans find all kinds of food in supermarket bins. Mr Richards said: “The most constant thing we get is bread. We find anything up to 30 loaves of bread in a single raid.” He added: “There is a lot of wastage around Christmas. Once, we got an enormous stack of mince pies, as well as some expensive goods, like gammon and pâté.”

But what about the risks involved? Bin raiding is classed as theft by finding and could land you in prison for seven years. Ms James said: “Some supermarkets are more sympathetic than others. I’ve been caught at Tesco a couple of times, but I’ve never really been in trouble.”

Freeganism and the law on Storify

Some also question the health issues related to taking food out of bins. Mr Richards said: “When I was a student, we lived on bin food for a whole year and no one got ill. You just have to use your common sense.”

With grocery bills continuing to rise, maybe more people will be considering how to reduce food waste this Christmas. For tips on how to reduce your festive footprint, take a look at the Waste Awareness Wales website.

Four million people in the UK can’t afford a healthy diet, but supermarkets are throwing away huge amounts of food every day.

According to a report by the Sustainable Development Commission, supermarkets throw away 1.6 million tonnes of food every year, although campaigners believe the actual figure is nearer 2 million tonnes. The worst part is that much of this food is perfectly edible, but supermarkets don’t want to give it away because of liability concerns.

Food waste also has a significant impact on the environment. As the food rots, it produces greenhouse gases, including carbon dioxide and methane. In fact, the UK’s total annual food waste is responsible for 20 million tonnes of carbon dioxide emissions.

I’ve been looking into food waste and some potential solutions. I’ll be looking at how much supermarkets in the area throw away, as well as meeting some freegans and skip divers in and around Cardiff. Look out for the blog post in the next couple of weeks.

So, this is the first post on thegreenveggie. (Not theveggieblog, veggiegirl, vegout, or even veggiepanda – yes, apparently all those were already taken.) I feel I should say something profound. Inspiring. Insightful. But that would be asking an awful lot after a long, hard day, so instead I thought I’d start with a bit about the blog, where the idea came from and what I’ll be talking about.

Firstly, a bit about me. I turned veggie at the tender age of 13 after a traumatic incident at a French market finally persuaded me I wasn’t really a fan of killing and eating animals! I’d always questioned where meat came from, and was uneasy about the idea of rearing animals for food. Today, I’m veggie, not only due to animal rights issues, but also on environmental grounds.

I decided to start this blog because I love veggie cooking and am really interested in the environment, sustainable living and animal welfare. I know there are plenty of veggie blogs out there, but although I’ve been spoilt for choice when looking for recipe blogs, not many seem to address topical news and debate.

So if you’re looking for current veggie news and comment, as well as interviews, restaurant and product reviews and the odd recipe, you’re in the right place!