Mincemeat is definitely an underrated ingredient. If you’re bored with traditional mince pies, try this crumble, which offers a new take on an old festive favourite. Delicious served with a generous spoon of custard or ice cream. 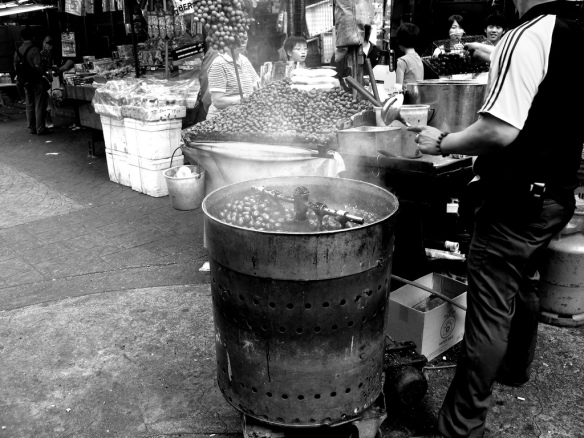 I’ve been popping out to the Christmas market during my lunch break and the roast chestnuts smell amazing. Perfect for warming up cold hands on a chilly winter’s day. This photo was posted by Stratman and shows a chestnut stall in Asia.

If you have a photo you would like to see featured on the site, email lizannday@gmail.com or tweet @thegreenveggie.

This is one of my Mum’s recipes and I always look forward to it when I go home in the winter. It’s a great accompaniment to vegetarian stews and goes well with mashed potato. A fantastic winter warmer. Plus, it smells amazing while it’s cooking.

Why is it that vegetarians are still ostracised at Christmas? People who are normally perfectly accepting suddenly start raising eyebrows and incredulously asking : “But how do you LIVE without pigs in blankets?” You become the eccentric colleague. The hippy friend.

I’ve had some interesting vegetarian Christmas meals over the years. The first year I turned veggie, my poor Grandma was horrified. I remember her saying: “So, you’ll just have one slice of turkey?” and when I politely declined: “Well, you WILL have some nice gravy on those potatoes, won’t you?” Funnily enough, I wasn’t keen.

A vegetarian in France

Then, there was the year in France. Which was my own fault really, because France just doesn’t DO vegetarianism. I was living in a youth hostel, and generally cooked for myself, but decided to join in with the festivities in the canteen after the chef persuaded me she’d rustle up something veggie.

As my friends were heartily tucking into salmon, turkey and foie gras, I was given a slightly soggy omelette, with a couple of token green beans on the side. But I was grateful to these militant carnivores for making the effort!

This year didn’t go much better. Last week, I went out for a Christmas meal with some friends. The veggie option on the menu looked like a solid, if slightly uninspired, choice. Nut roast – can’t really go wrong. Or so I thought.

Unfortunately, the kitchen seemed to have been so busy with the turkey, they’d decided to buy in a frozen nut roast, and then not really bothered to cook it properly, so it was still frozen in the middle. Then they tried to cover up the dreary greyish presentation with some congealed vegetarian gravy. Yum.

The work Christmas meal was slightly better. The leek and potato soup was actually a delicious starter, but then they forgot my main course, and everyone else had finished their turkey by the time my meal was brought out of the kitchen by a rather fraught waitress.

But I have high hopes for tomorrow. My Mum’s making a chestnut roast with all the trimmings, which sounds delicious. So tell all those carnivores, life goes on without pigs in blankets! Merry Christmas!

I’d love to know what readers of thegreenveggie are planning to cook on Christmas day:

Feel free to leave any comments / links below. All ideas welcome!

It’s the trimmings that make Christmas dinner that extra bit special. Here’s an unusual recipe for apricot and chestnut stuffing – a sophisticated accompaniment for any vegetarian main.

“Vegetarians outraged by reindeer paté for Christmas at Harvey Nics…”

Here’s this week’s most important vegetarian news on storify.

Photo: What’s all this then