If you’re starting to think about where you might go on your holidays this year, why not plan a trip to some of these veggie fairs and festivals, which are taking place all over the UK throughout 2013.

March 16 – 17. Brighton VegFest is back and it’s bigger and better than ever. Expect to find more than 120 stalls spread across three floors. There will be cookery classes, live music, free nutritional advice and even speed dating.

March 23. Evesham Vegan Fair looks set to be a much smaller and more intimate affair. Organised by Midlands Vegan Campaigns, the fair will offer 20 stalls with vegan cosmetics, recipe books and Easter eggs, as well as cookery demos and talks.

April 13. Northern Vegan Festival will take place in Manchester on April 13. Visitors will find 90 vegan stalls, selling vegan chocolate, clothing and gifts, as well as children’s activities, films and a talk on eating out in the north of England. 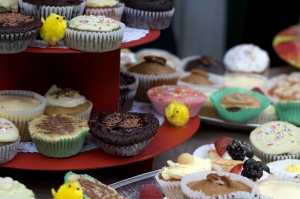 May 24 – 25. VegFestUK will return to Bristol for its 10th anniversary. More than 120 stalls will celebrate every aspect of a vegan lifestyle, from food to fashion. There will also be live music, films and entertainment.

August 3 – 17. Vegan Camp has been running in Cornwall for 32 years. Individuals, couples and families are invited to visit for a day or stay for the full two weeks. Communal meals, camp fires and picnics make this a unique event.

October 5 – 6. The dates have been confirmed for a huge new show in London at the world-famous Kensington Olympia. VegFest London will offer comedy and music, alongside all the essential stalls and demonstrations.

December 8. You may not be thinking about Christmas just yet, but the Christmas Vegan Fayre in London’s Kensington Town Hall is a definite date for the diary. Organised by Animal Aid, the event will showcase everything you need for perfect meat-free festivities.